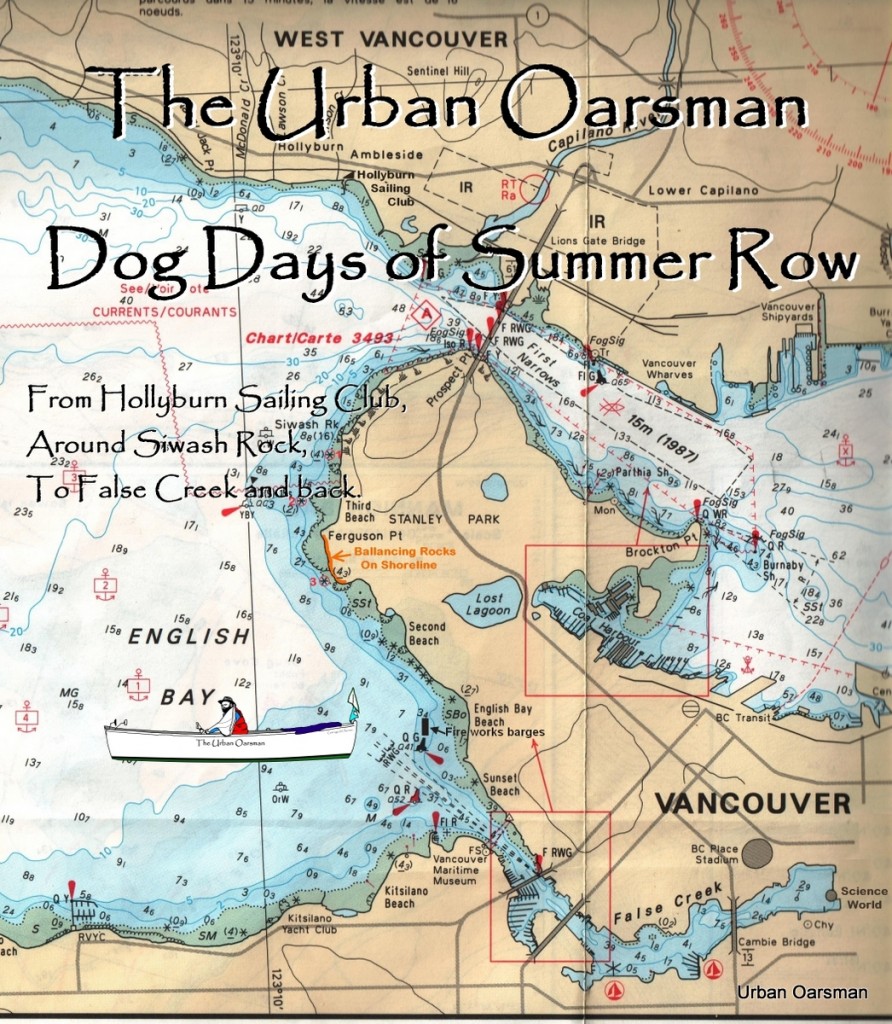 High tide will be around Twelve thirty seven.  The plan is to row with the current, cross the maelstrom, around Siwash Rock, and on to False Creek with the tide.  When the tide turns, I will ride the outflow from False Creek, along Stanley Park and back to Hollyburn Sailing Club.
As I drive down 15th Street in West Vancouver, I can see the rocks off the Western shore of Stanley Park are almost awash.  This is the “Rule of thumb” that there is enough water to row around Siwash Rock.

I row towards Stanley Park and Siwash Rock.

As you can tell from the flag, there is not much wind, a slight breeze from the west.

English Bay is calm, there are only swells from passing boat traffic.  I turn my UHF radio to channel 12, the Vancouver Harbour Traffic Channel.  This channel tells you of all the commercial traffic in the Harbour, especially the freighters that are coming into Burrard Inlet and the time that they will pass under First Narrows.  This is good information to know.

Siwash Rock has enough water around it to row around.  The “Rule of Thumb” coming down 15th Street in West Vancouver has proven itself again.  Please note the waxing moon in the upper left corner of the photograph.  One day I hope to come here to take picture of Siwash at sunset.  Should be a grand row.

A photo of the gap between Siwash Rock and The Sea Wall.  There is a 1.5 knot current through the gap.  Because of the underwater topography, there is always a current from the west through the gap. whether the tide is coming in or going out.

I am going to row through the gap between Siwash Rock and the Seawall.

I do not have to row very hard as there is a strong current through the gap when ever there is enough water to pass through.

I continue rowing to False Creek, Having rowed around Siwash Rock Twice.

I row on towards False Creek.  Can you see the Stanley Park gun emplacement?  It is in the Picture.

Some of my friends who went to UBC and lived in Fort Camp have told me that these (especially the one on the endowment lands beside wreck beach)are search light emplacements and not gun emplacements.  One day I will have to go inside on and see if there are footings for guns or search lights.

This rock is just west of Stanley Park and south of Siwash Rock.  I have marked it on the opening chart as #1, circled in red.

The airspace over Stanley Park is always busy.  There are always a lot of seaplanes and helicopters going overhead to and from Coal Harbour.

I row around another breaking rock on my way to False Creek.

The West shore of Stanley Park has a number of breaking rocks that an Oarsman must stay clear of.

Rowing past Prospect Point.  There are many hazards if you stay close to the shore line.

I stay seaward of the rocks near the shore.

I marked on the opening page chart where the Balancing Rocks are.  There are a lot of them.  I counted over sixty along this stretch of seawall.

Another close-up of the Balancing Rocks.

This is “The Drip”, a sculpture in Vanier Park at the entrance to False Creek.

There are two dock and launch ramps at the Kits boat launch.  When I am taking my wooden clinker lifeboat to the Vancouver Wooden Boat Festival, I usually launch here.  The tents in the background are for the “Bard on the Beach” events.  Usually quite good…You should go to a show there, it will be worth your while.

I row on into False Creek.

There are so many boats anchored in False Creek that the False Creek ferries weave around them on their routes.

To the right of the picture is a Ferry stop on the dock on the water.

As I rowed past, a worker was painting out the graffiti on the footings for the Cambie Street Bridge.

I remember when barges used to be unloaded from this dock.  “The times they are a changing”.

This is a man made shoreline beside the Olympic Village.  Looks natural, but, all of it is man made.  Good job, almost looks as if  it could be natural.  I wonder is the crows appreciate it.

I do not know if the roof is open or closed.  I would think that with the weather we have been having, the roof is now open.

This inlet looks like almost any other but there is no creek at the head of it.

The crows seem to like the point.  I wonder if any Eagles ever perch here.

Science World.  There is a False Creek Ferry stop to the right of the picture.  This is where I turn around and return home.  I am about two and one-half hours into the row.

I believe that this sculpture is left over from Expo ’86.  I do not knot know what it is called.

I believe that this one rotates around the pillar.  The two round things are floats.

As I row out of False Creek I espy these Cormorants on the footings of the Burrard Street Bridge.  I usually see them on Siwash Rock or on the cliffs by Prospect Point.

I row out of False Creek and the Vanier Park flag is flapping limply.  There is less wind now then when I came in.  Perhaps an easier row home than I thought.

The wind has picked up the chop on English Bay.  Could be a long row home.  Three and one-half hours into the row.

Deadheads are water saturated logs that float with only a small part of them showing.  Much like a iceberg.  Boaters will often mark deadheads that they find with a flag so the deadheads are more visible.

On the way home I row inshore of the barges in the quieter water.  This sounds like a good idea, but there is a counter current flowing southerly along the beach.  I stop and measure its speed, almost a knot and a half.  I guess I have to row a little faster.

If you look closely at the buoy, you can see its bow wave in the current.  I am down to less than a knot of forward headway in this current.  Looks like it will be a long row.  Just over four hours into the row.

Siwash rock.  The counter-current has stopped and I am now making good time,  It took me almost an hour and a half to row from English Bay Beach to here.  Sometime I feel like the frog that just kept swimming in the butter churn until he churned up enough butter to float on.  Sometimes you just have to keep rowing to push over the hump.  Just the shipping channel to clear.  I hear on channel 12 that there is a freighter coming into Burrard Inlet for 4:00pm.  Just enough time to beat it. I only need 20 minutes to cross the Maelstrom (Shipping Channel).

After Six hours at the Oars, I am back home at Hollyburn Sailing Club.  Not quite the berth that the rowing boat had at the Quayside Marina, but, still snug enough for Gwragedd Annwn. 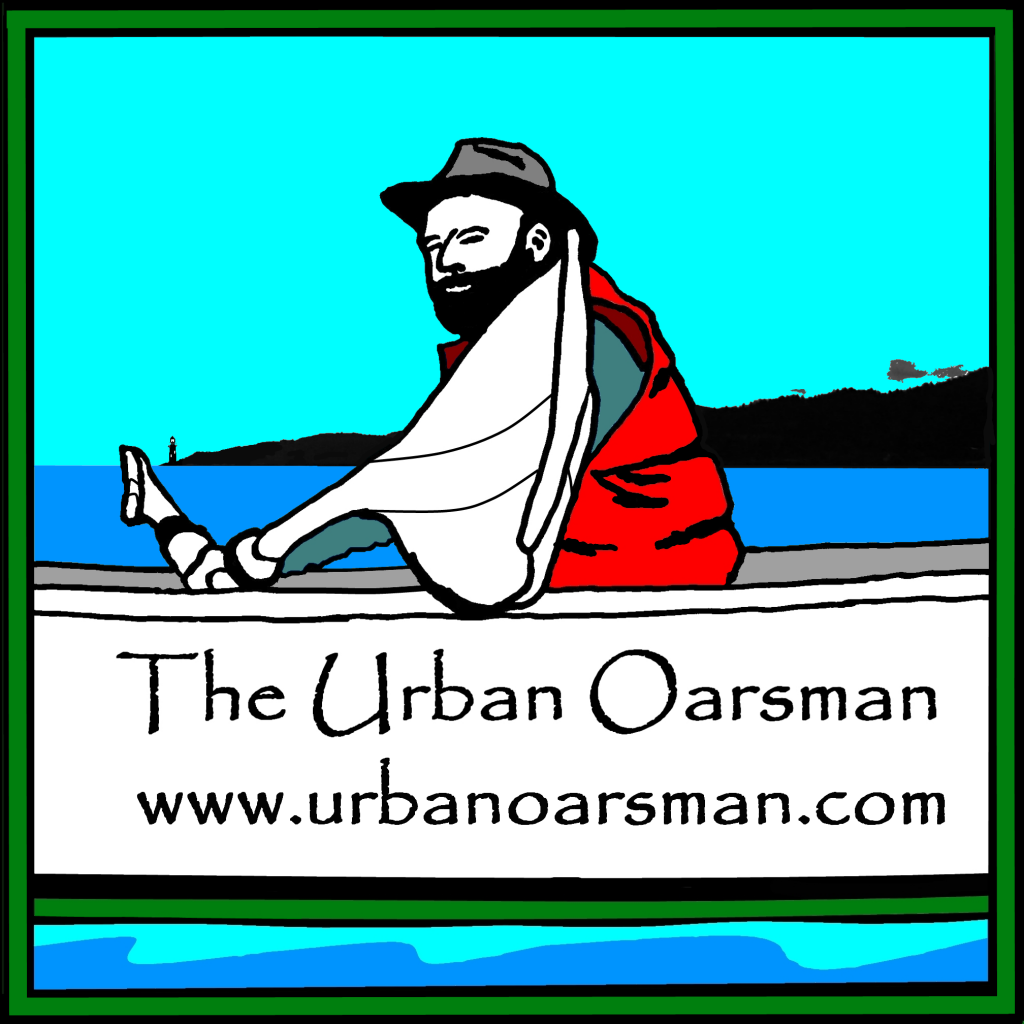