Another weekend and we have been plugging away, one strip at a time.  We had Thirteen  strips on and we have put on a strip every day or so and today we are putting on the Seventeenth. 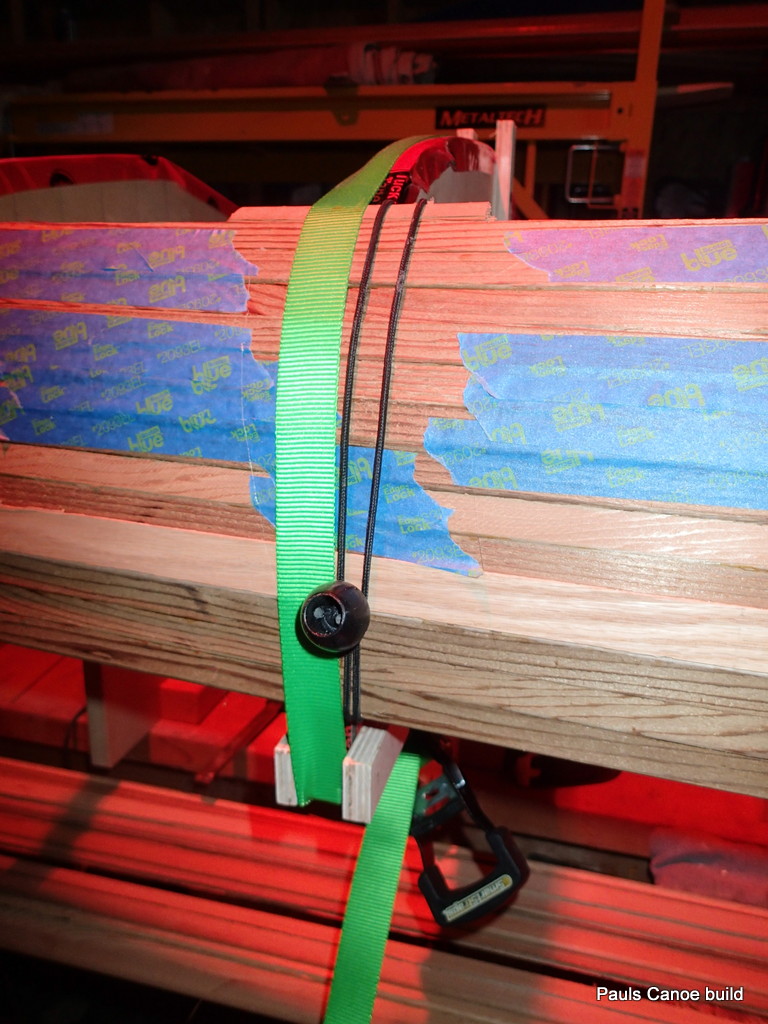 Where we left off…Thirteen strips on.  The Fourteen Strip is going on next.

We get ready to put on the Fourteenth Strip… 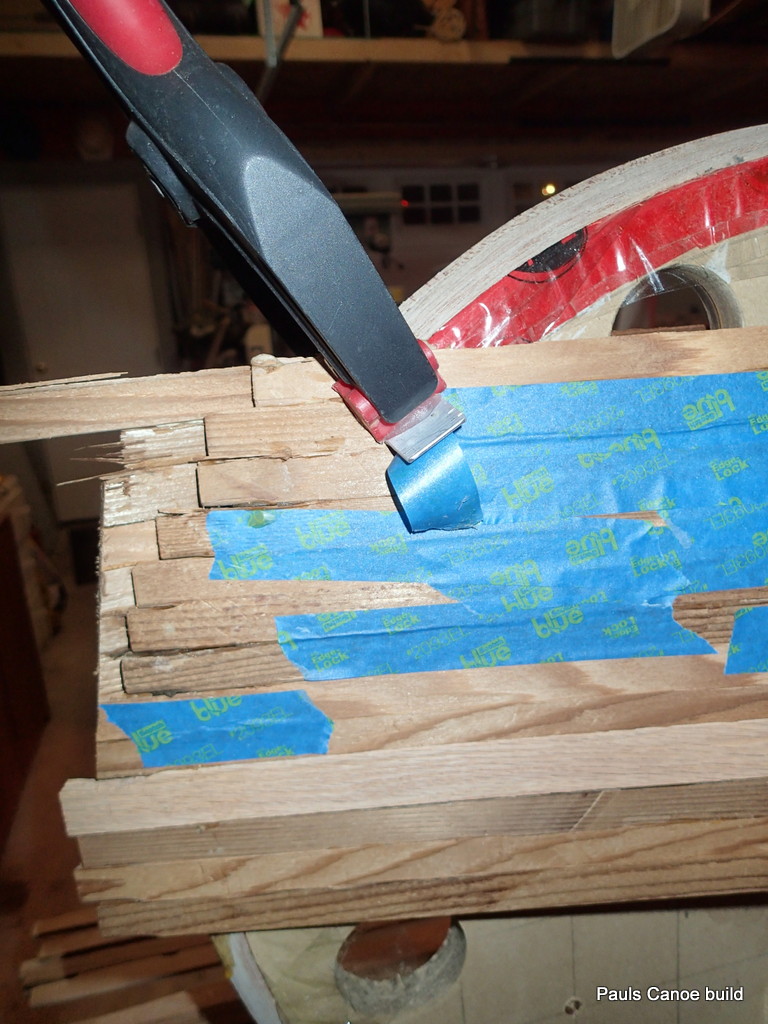 Tape at the North Stem. 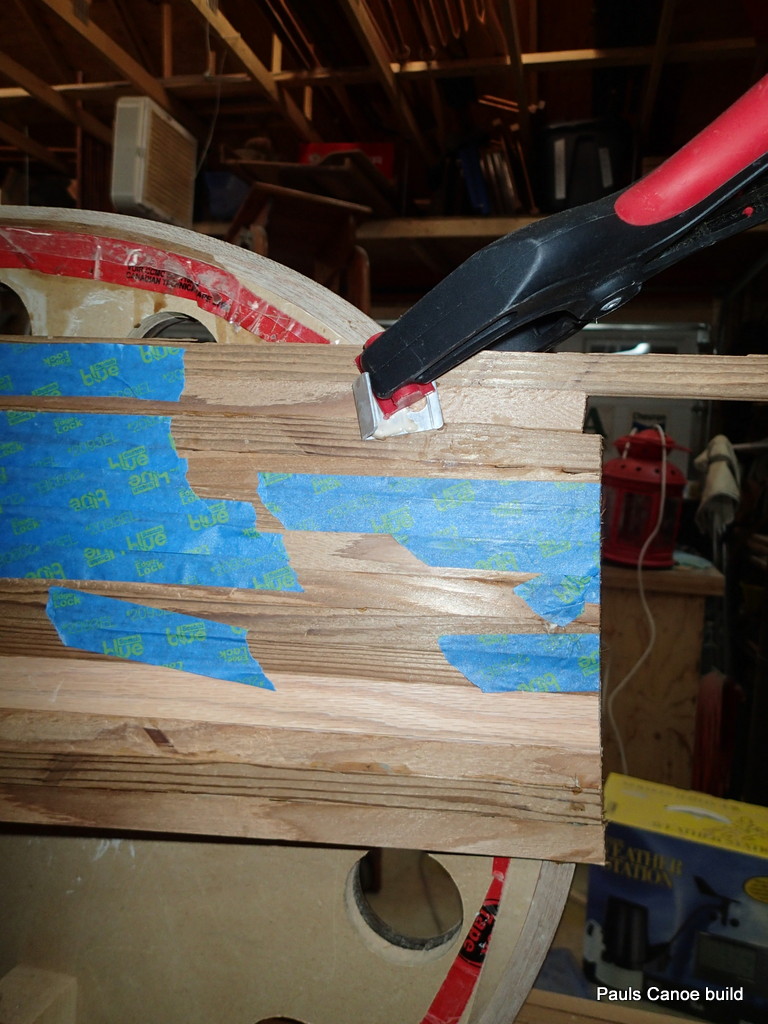 We put on the Fourteenth Strip and the next day, with all the tape off, we get a good look at the shape of the Canoe!! 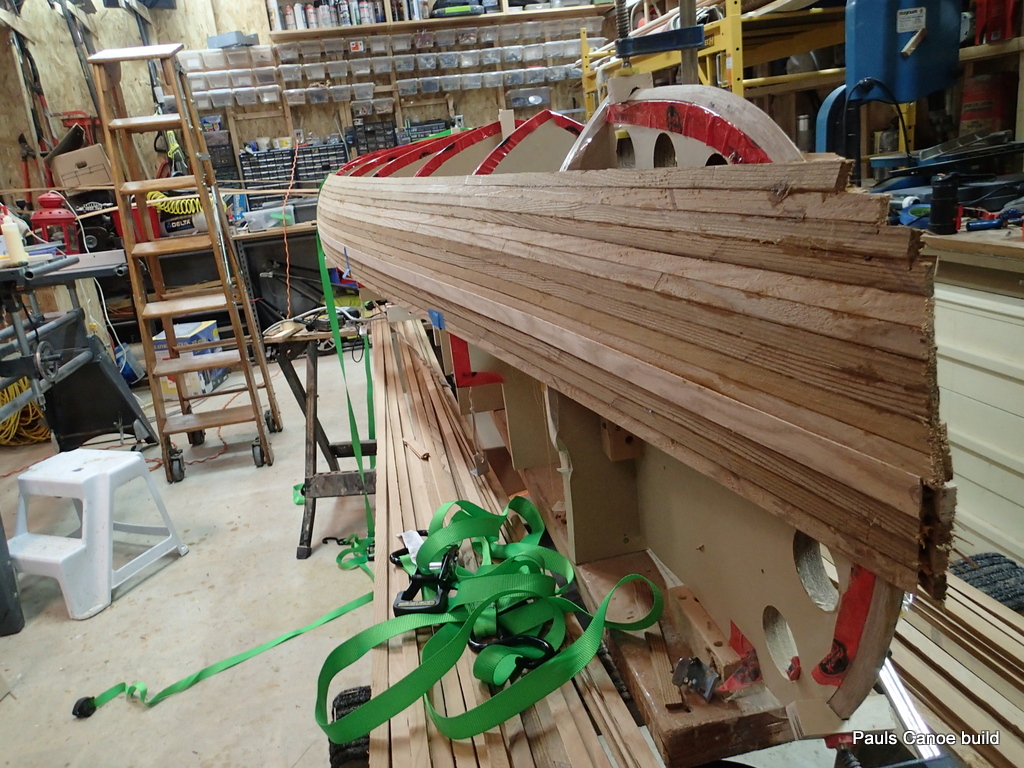 West side of the Canoe. 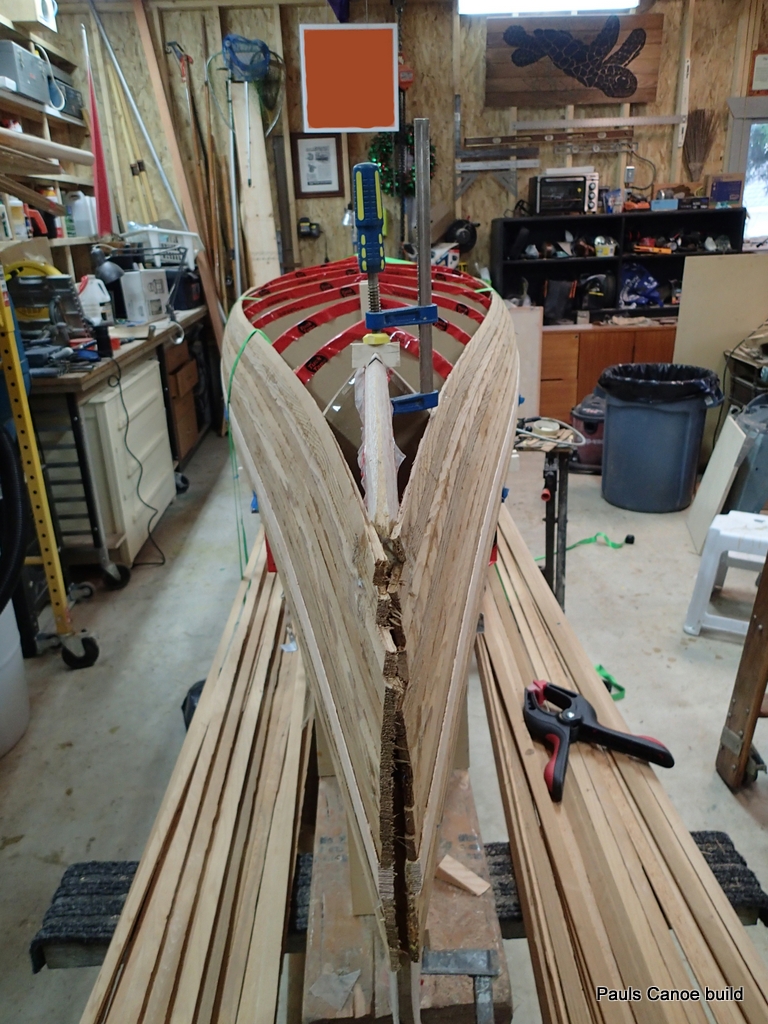 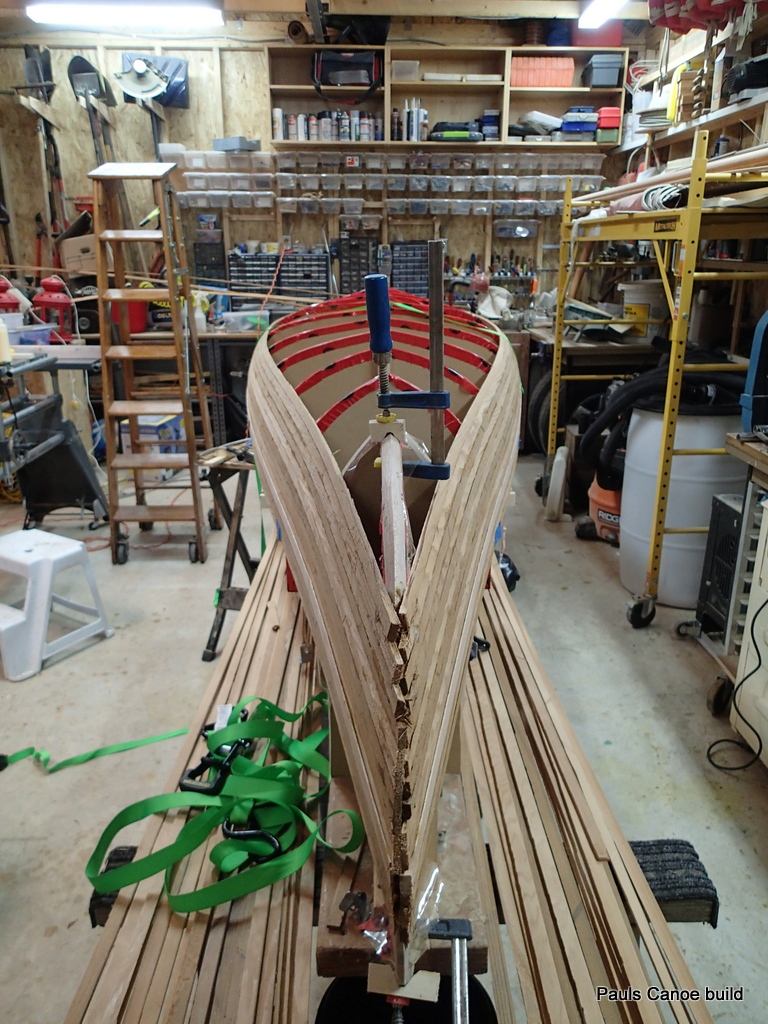 We are both pleased with how the canoe is taking shape, the curves look even from both ends.  The next day we put on the Fifteenth Strip and then the Sixteenth trip later that evening. 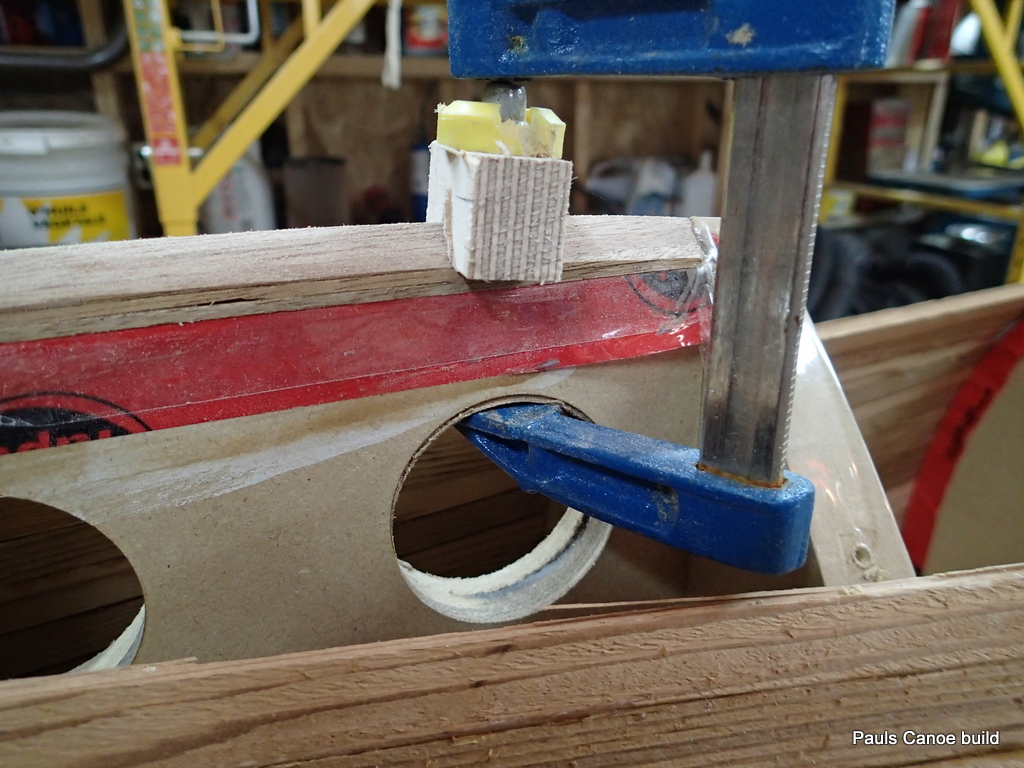 Clamps holding the stem-pieces on each end are now in the way .

We have to remove the clamps holding the stem-pieces to fit the Seventeenth Strip. 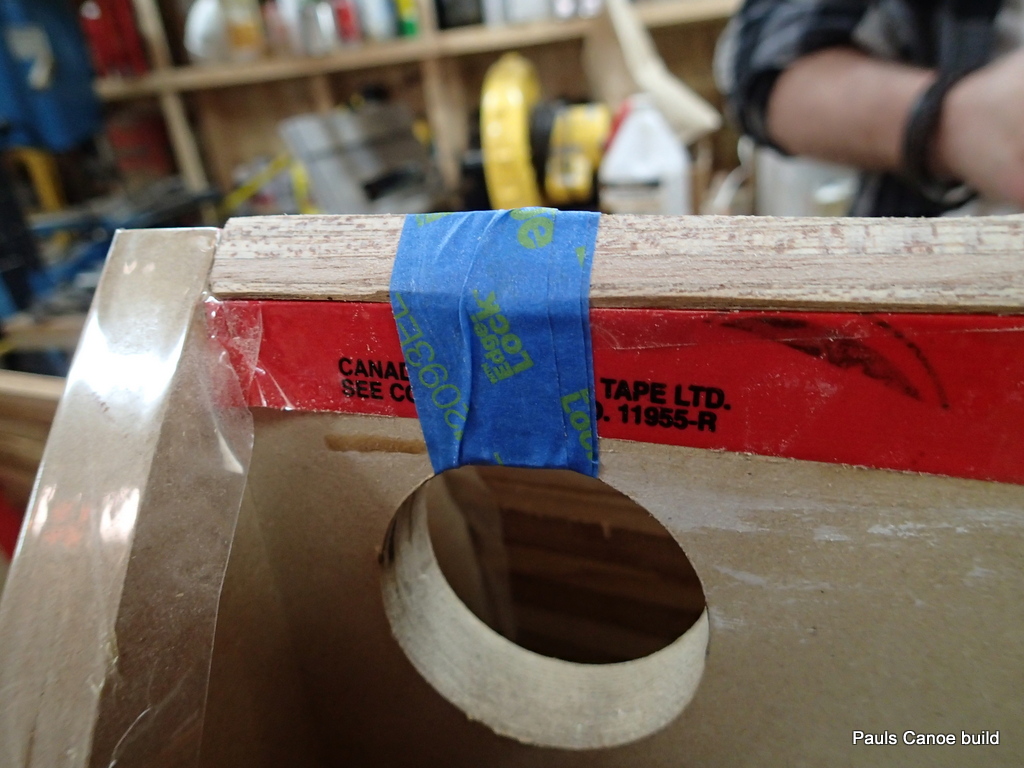 Painters tape to the rescue!  Let us get that strip on!

We apply glue to the cove and get the strips under the straps.  The squeeze clamps hold the strips temporary while we put the glue on. 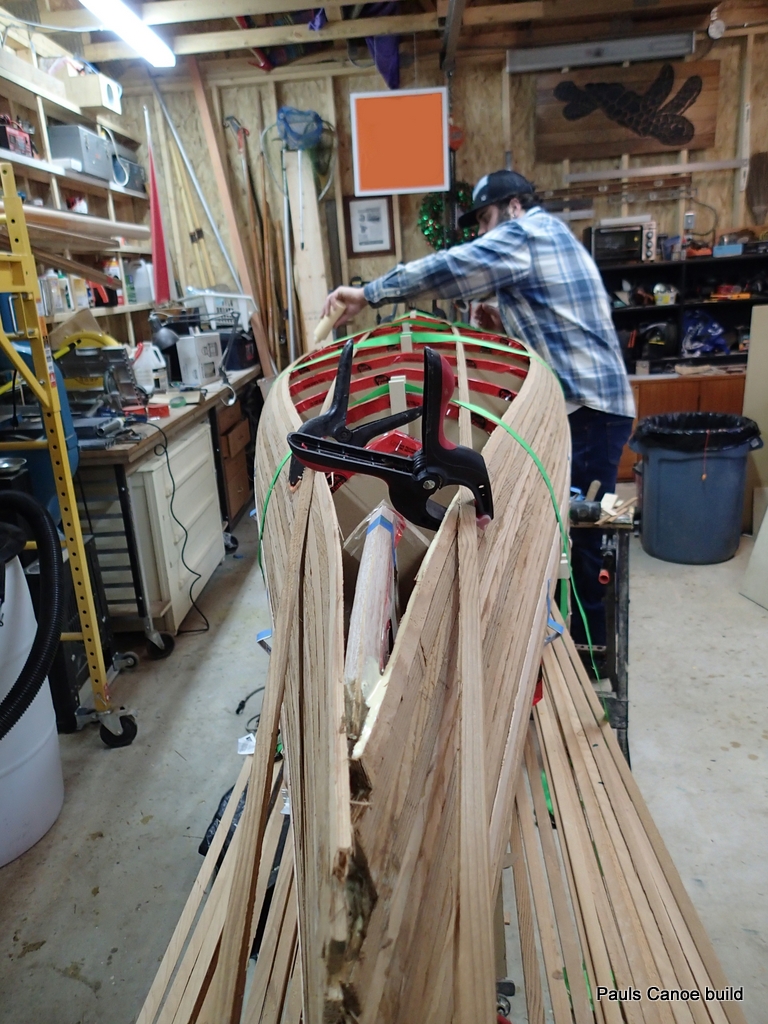 Paul putting the glue into the “cove” on the strips.

We use squeeze clamps to hold the strip while we tighten the straps from the centre outwards. 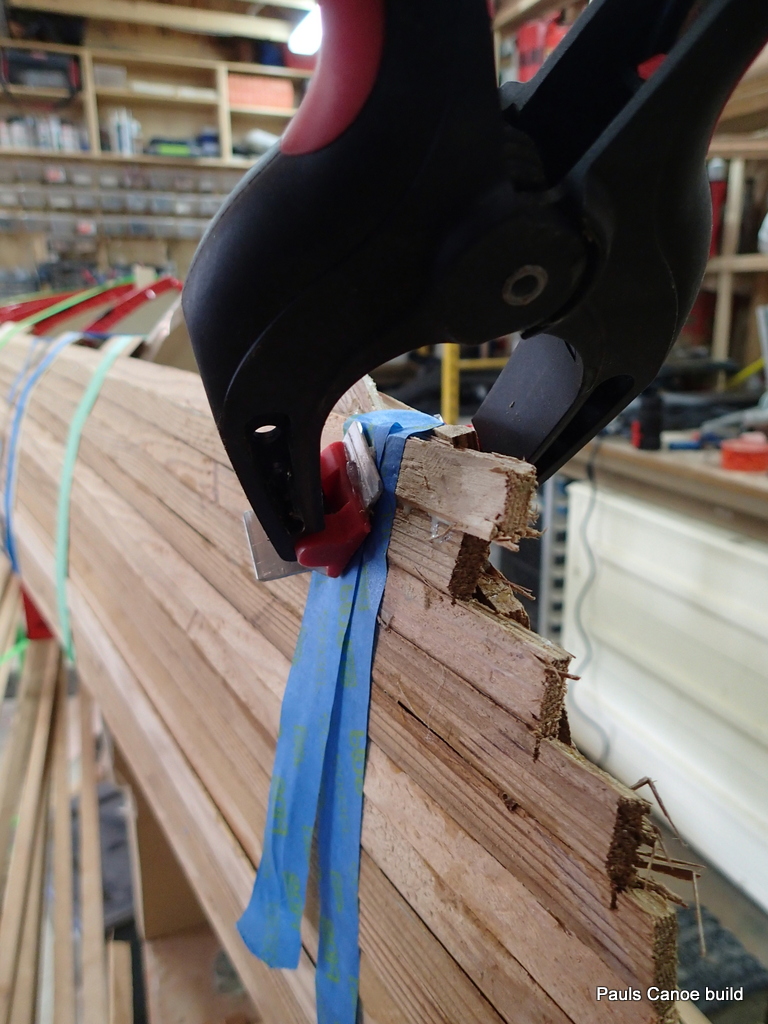 We are still having a hard time getting the stem squeeze clamps to stay in place while the glue sets. 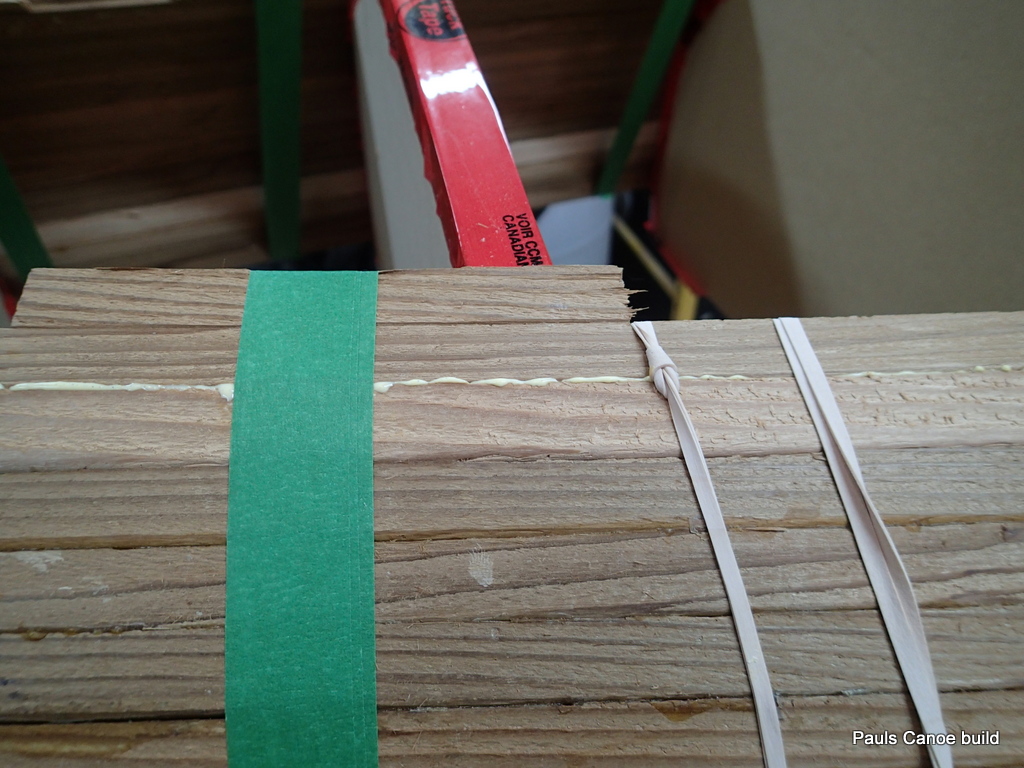 Glue squeezed out, tape holding the new strip onto the old one.

We are using a lot of tape, but, I had a lot of left-over from painting the house.  Might as well use them, as the tape does go “bad” over time.

We are using a scrap piece of strip when taping so we do not crush the “cove” with the tape.

Again, Painters tape to the rescue: 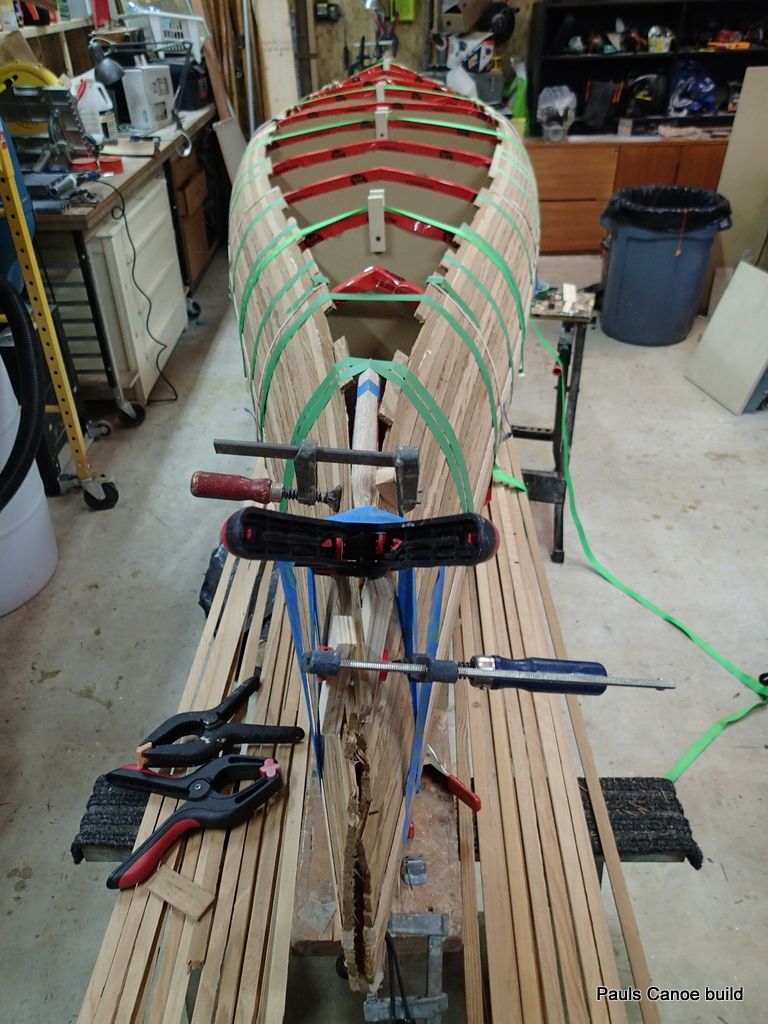 Painters tape used to keep the stem squeeze clamp from slipping, the strips together and pull the strip to the mould stations.

Another view of the North stem squeeze clamp being held in place by tape: 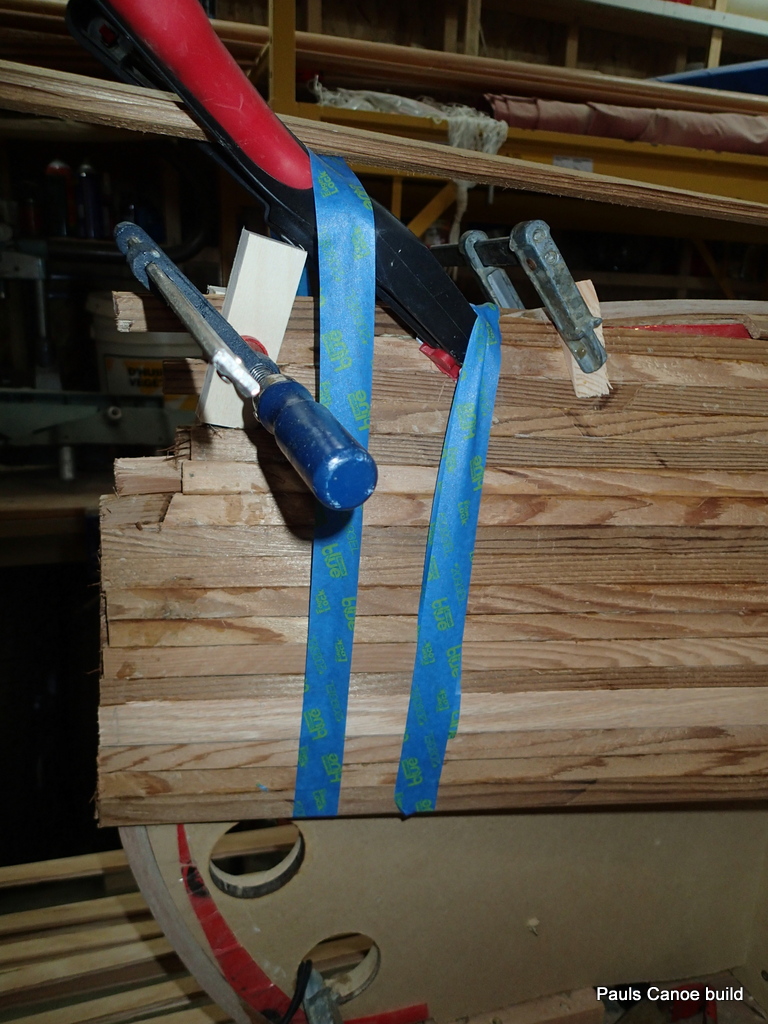 We use tape to hold the strips together while the glue sets.  The real drawback to this method is that you can only do one strip on each side of the canoe at a time.  Since Paul does not want to use staples or finishing nails to hold the strips to the station moulds, this is the way we will have to do it… 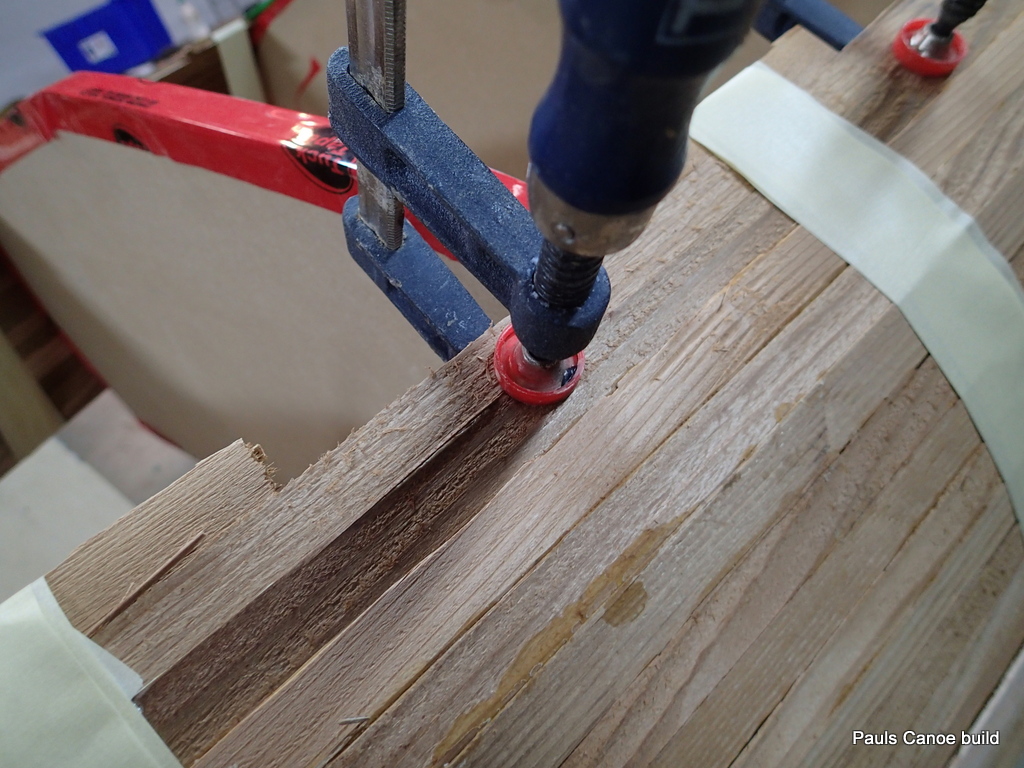 Occasionally, the strip does not want to stay in the cove below it. We use a clamp to keep the strips aligned.

Seventeen Strip on the canoe, Fourteen Strips to go.  Maybe two more on each side and then we will have to plank up one side at a time.  Getting there slowly but surely.

West side view, Seventeenth Strip all taped up. 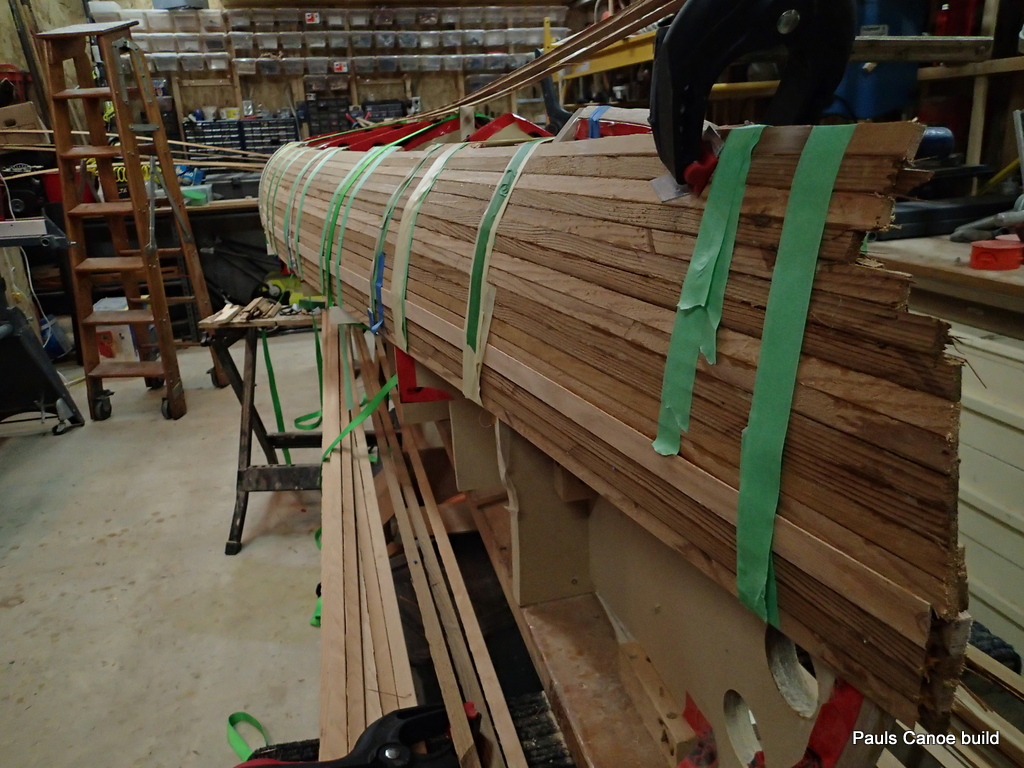 Good Paddling to you…. 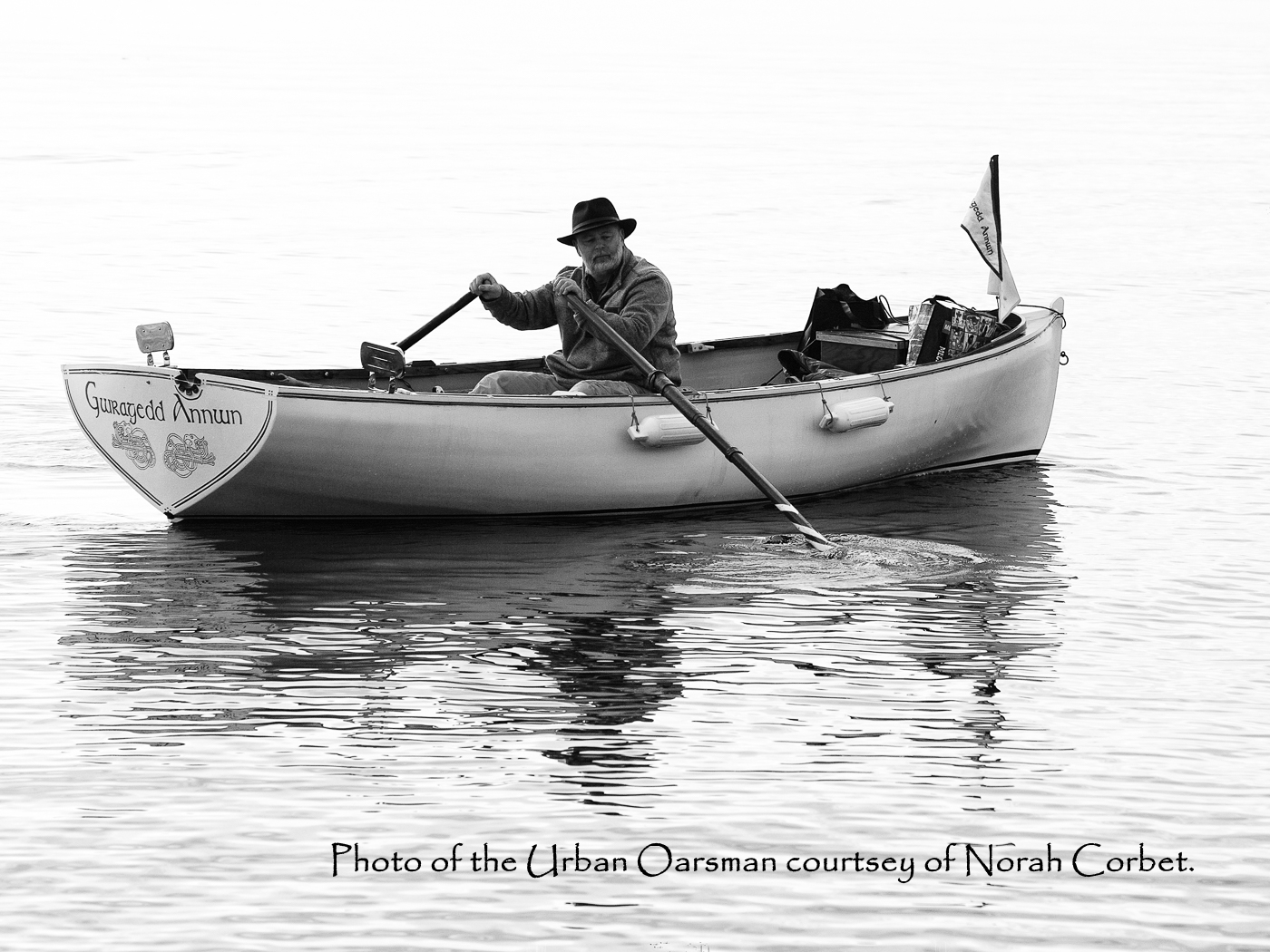