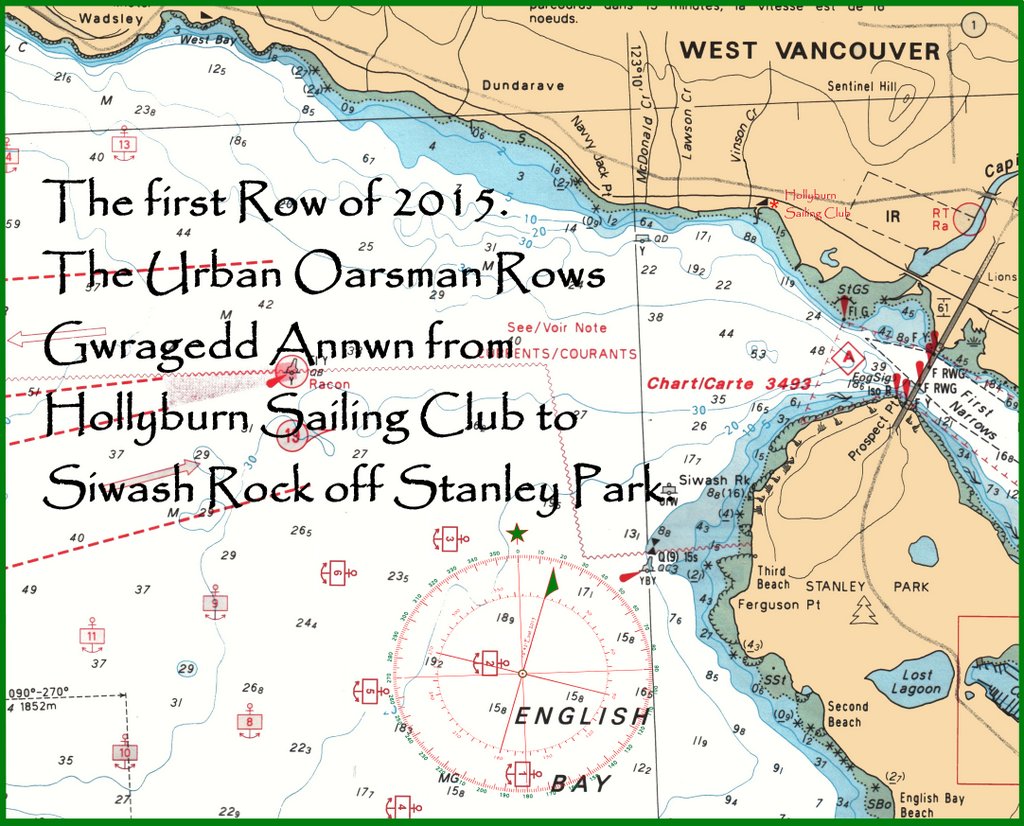 The first Row of 2015 .  Hollyburn Sailing Club always has a New Year’s Day racing event followed by a Club social.

Not much wind for racing.  I row through the fleet towards Stanley Park and Siwash Rock. 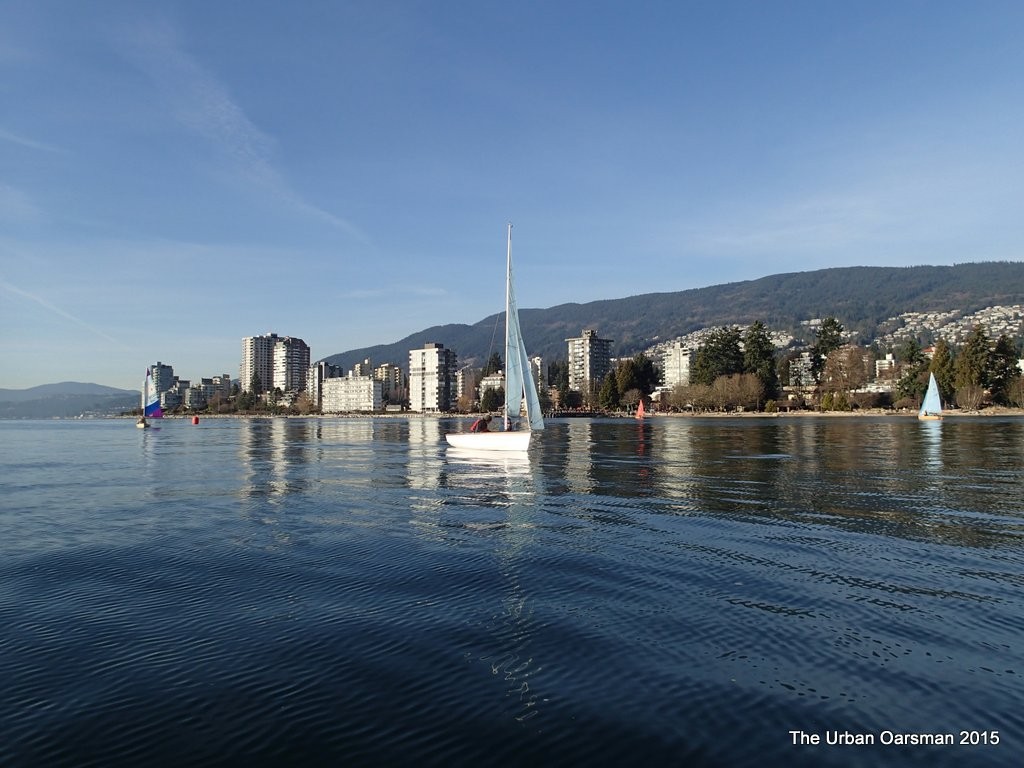 The lead boat is an Enterprise, “Rusty Jib”  Skippered by Ian and crewed by Tracy. 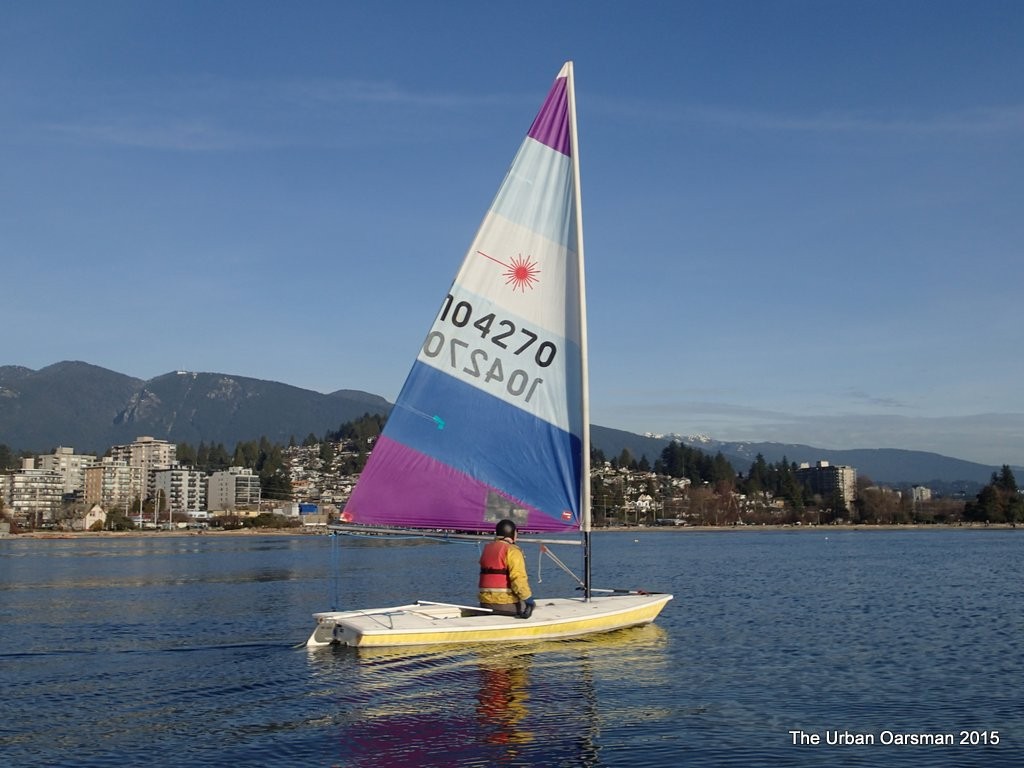 The 2015 Club commodore, Don is next sailing (well drifting) a Laser. 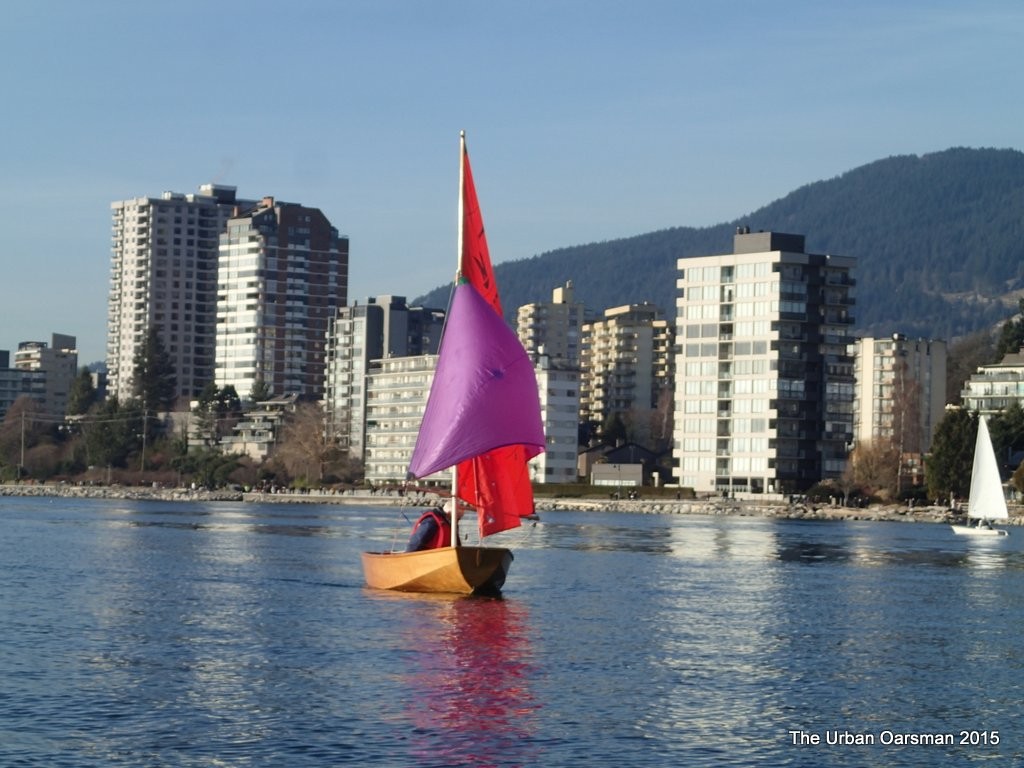 Dan has had an unfortunate Spinnaker hoisting incident in his Mirror 11.  It does not seem to be slowing him down too much… 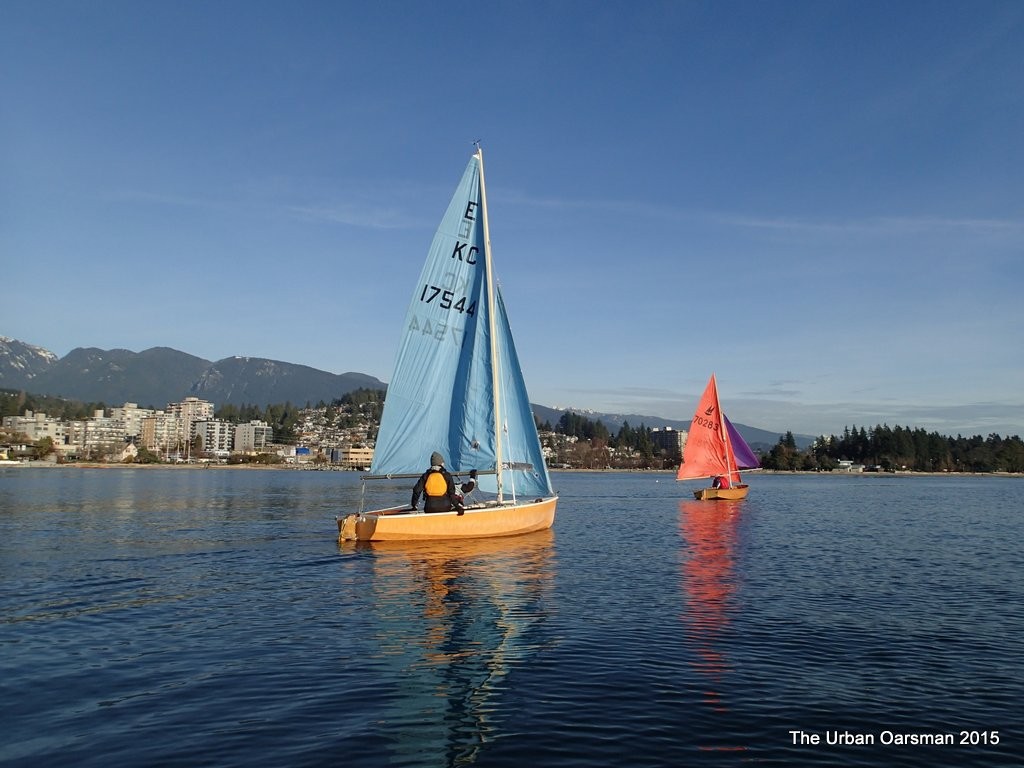 The fleet has passed and I row towards Stanley Park and Siwash Rock. I am listening to Vancouver Harbour Traffic on VHS channel 12.  There is no reported traffic. It is safe to make the cross the shipping lane. 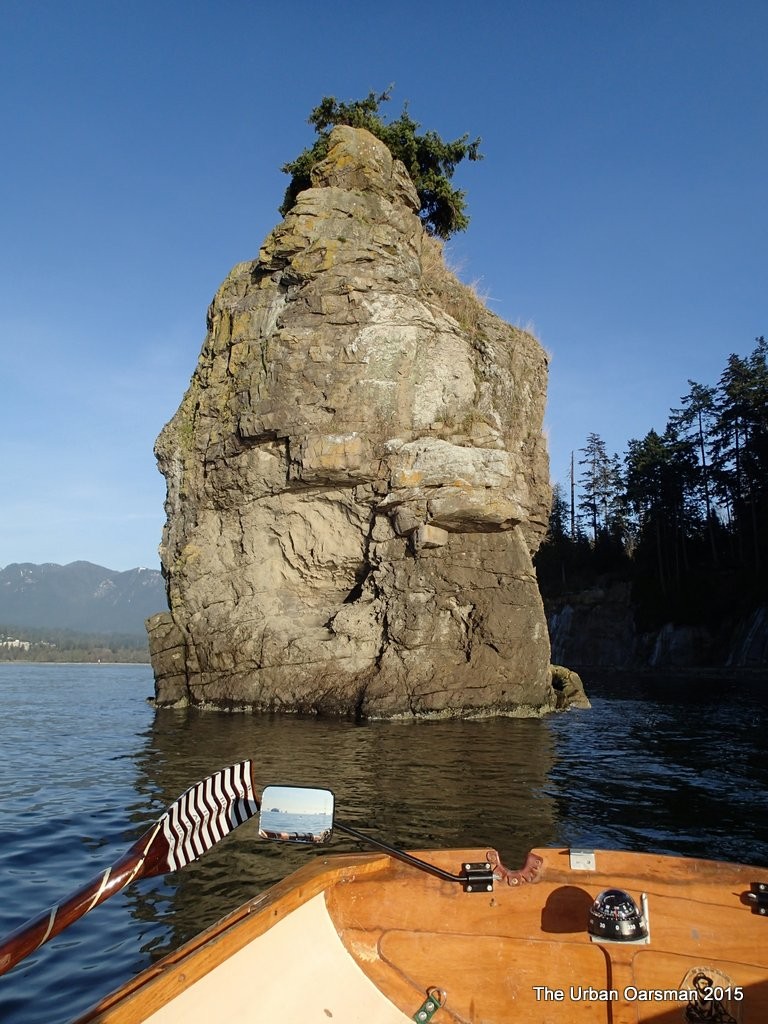 Twice around Siwash Rock.  There are a lot of walkers and bikers on the Seawall today. 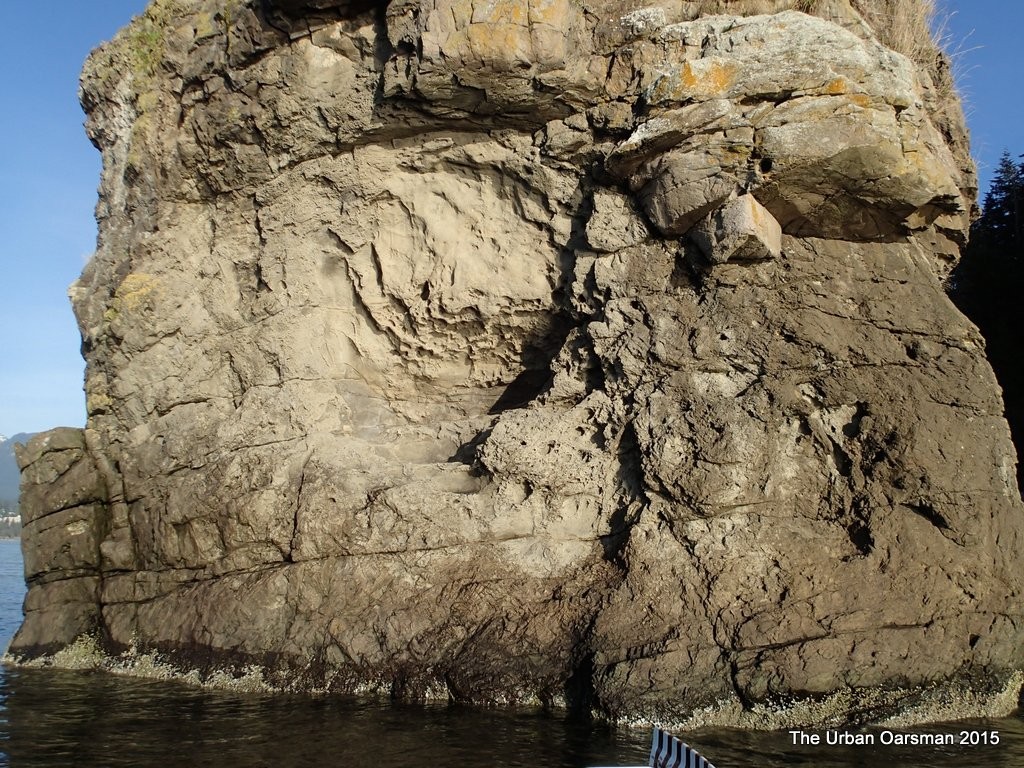 I am always intrigued by the “hole” in the seaward face of Siwash.  The texture reminds me of the Gulf Island shore line rocks and of the whale pool in Stanley Park Zoo. 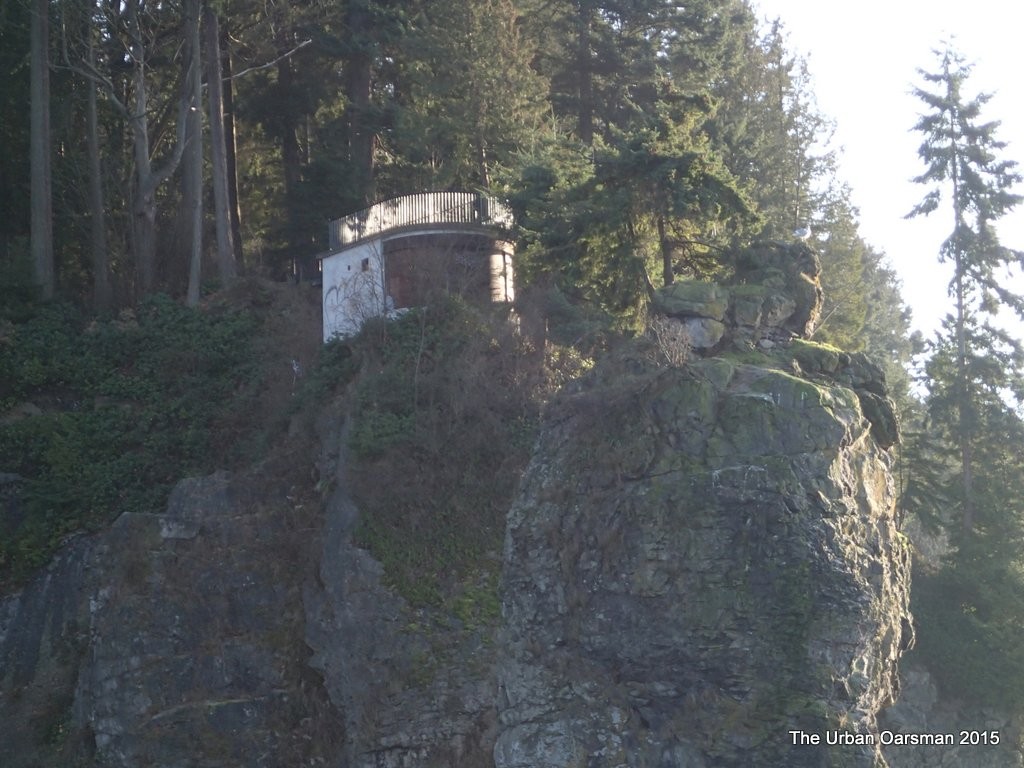 The search light building is very noticeable today.  It seems to glow in the sunlight. 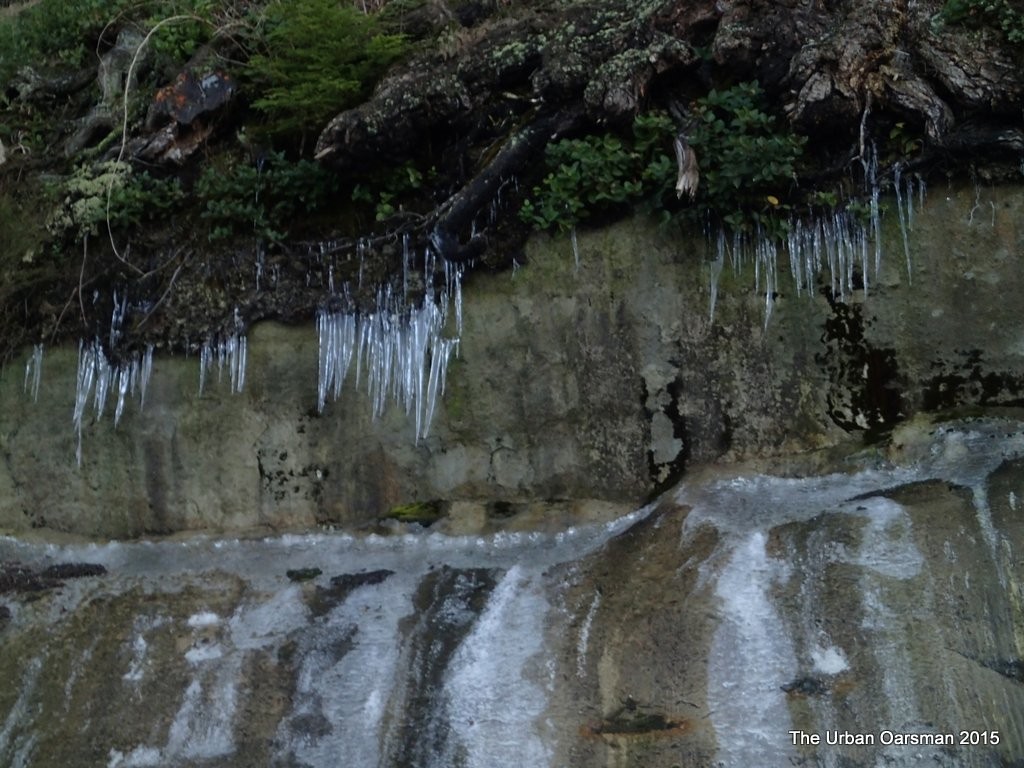 In the shade, the icicles linger.  Walkers were throwing rocks at them, trying to break them off. 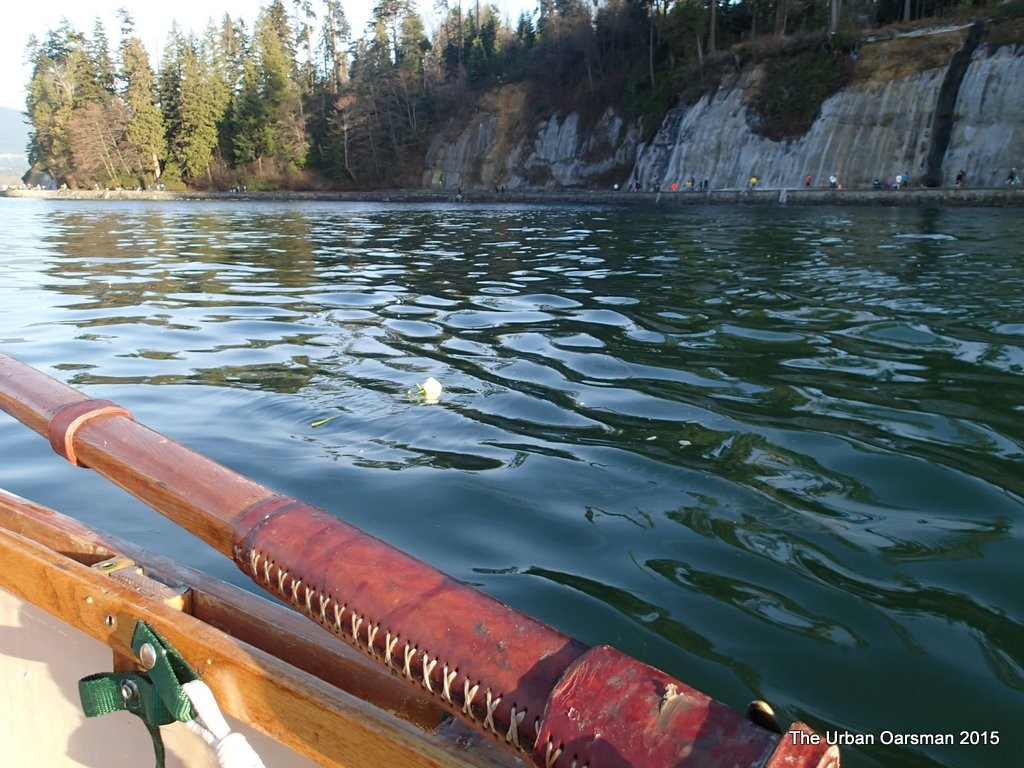 The icicles are visible in the background.  A white rose floats with the tide. 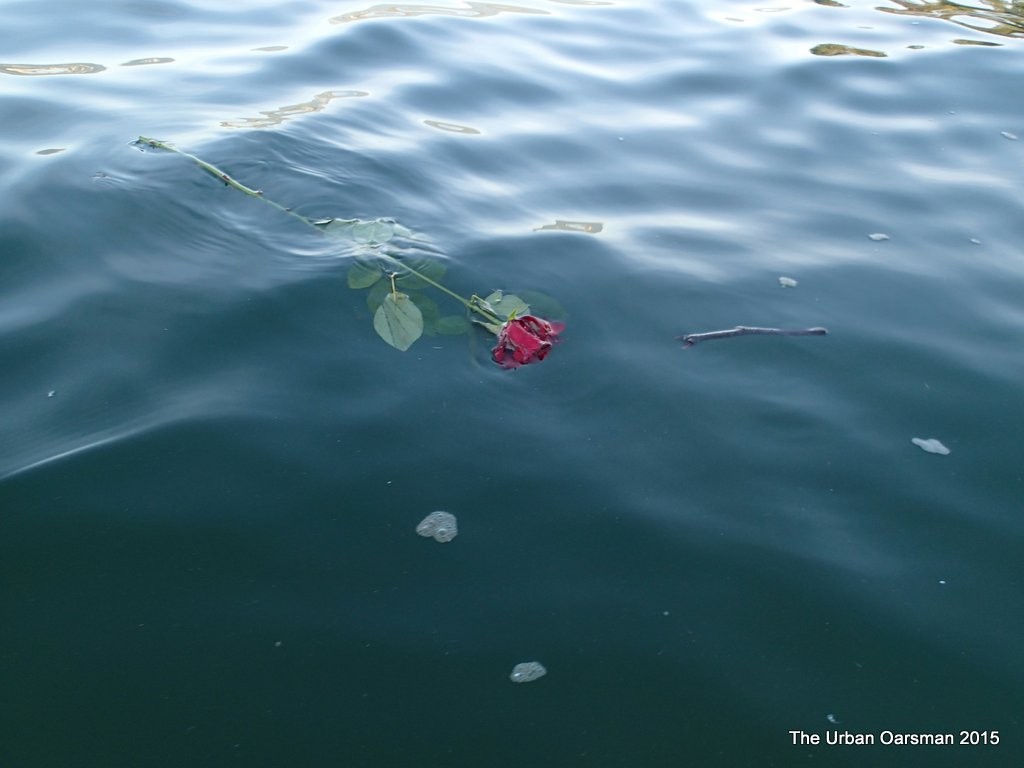 Nearby floats a red rose. 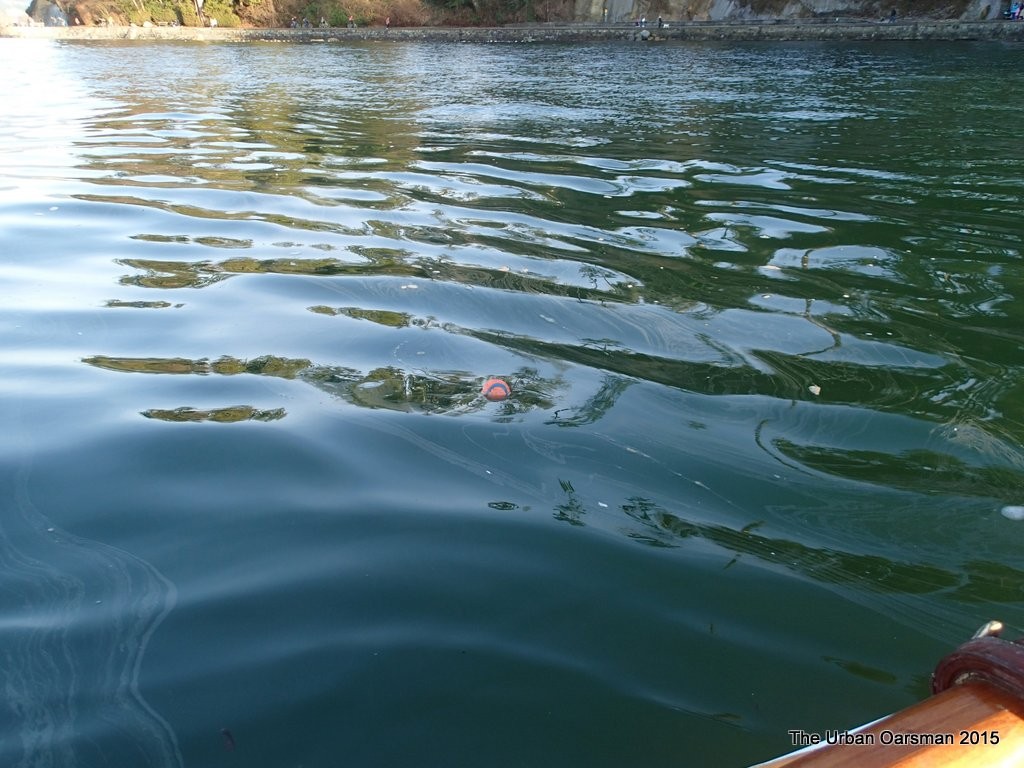 Lucky Cleo.  A new (to her) ball awaits her.  Cleo is a German Shepherd owned by a co-worker.  She loves the orange balls.  Cleo will start her New Year off right. 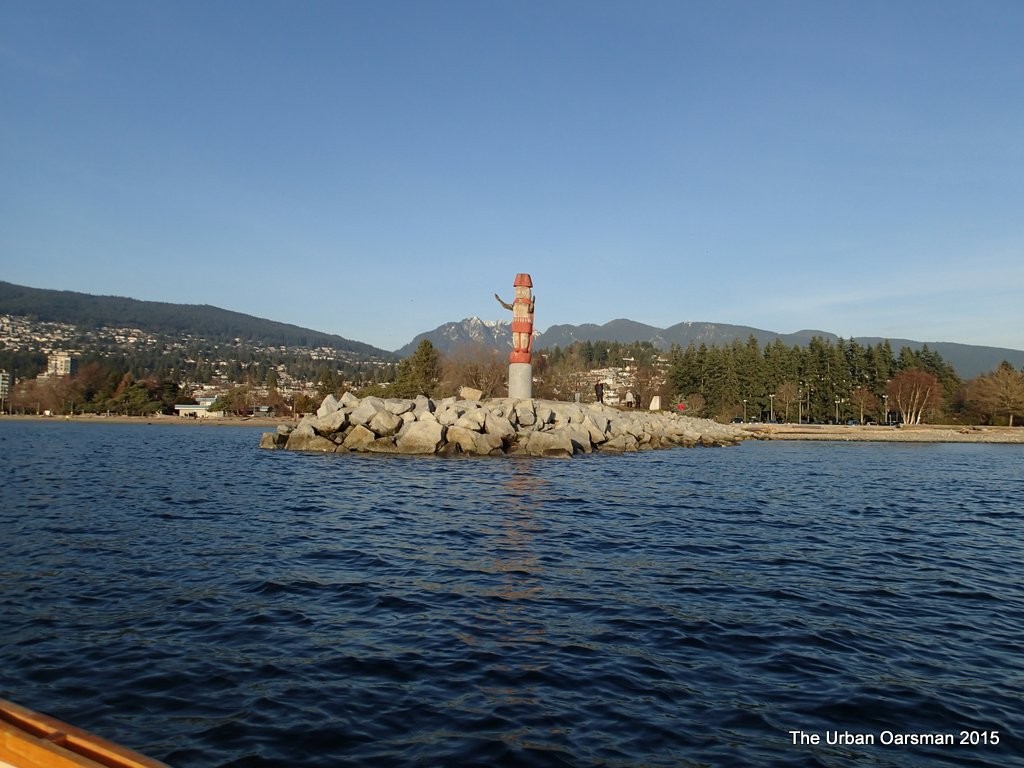 There is still no reported traffic.  I make the crossing quietly.  The West Vancouver Welcoming figure welcomes me too. 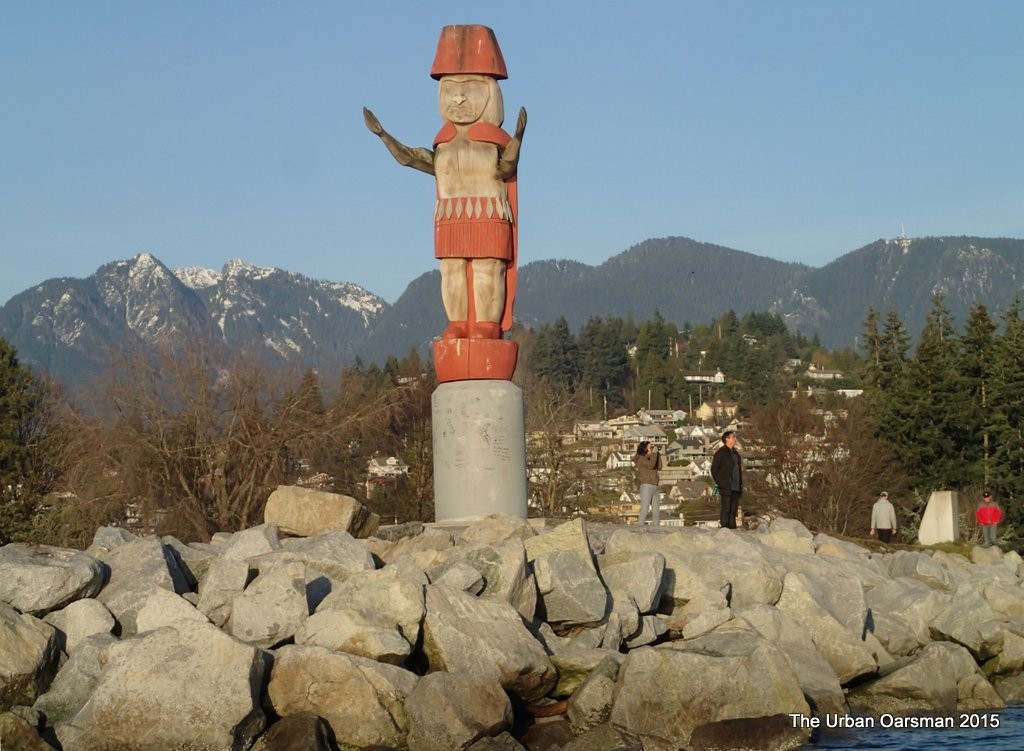 The welcoming figure was erected in July of 2001.  It is  to mark the gathering of ocean-going canoes.

GPS track of the First Row of the Year.

5.14 kilometers, an hour fourty at the thwart, about  3km/hr average speed.

What a start to 2015…A beautiful day, a great row, a welcoming figure and good friends at Hollyburn Sailing Club.  Welcome to 2015.  Best wishes for everyone. 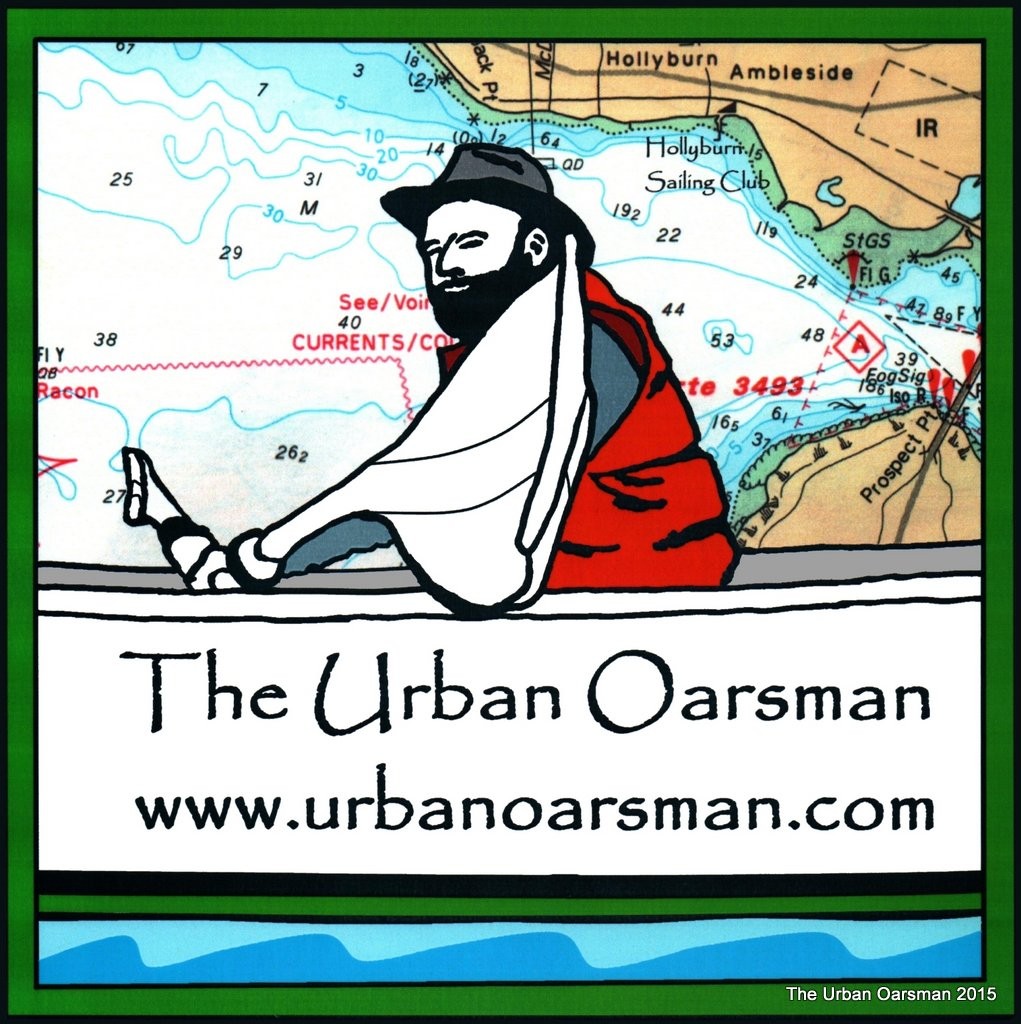